The same WING curtain with a perfected structure.

Constant development as a key to success.

Constant development is one of the factors which allows the VTS company to be always one step ahead of the competition, in every corner of the world. When in May 2016 the company demonstrated the WING curtain to the world, there were endless positive comments. The unique appearance of the device combined with functionality was a bull’s eye. VTS did not rest on its laurels at that time. Listening to remarks and suggestions from the market, in IIIQ of 2018 engineers of the company faced a task aimed at perfecting the WING curtain.

A number of talks and meetings, preceded by market opinion research, allowed to prepare assumptions of the project. The WING curtain has undergone a number of technical tests in VTS's Reaserch & Development Centre, as a result of which improvement works were planned. Some internal elements of the curtain were revised and external appearance remained unchanged in line with the assumptions.

The major point of the project was a change in shape of the fan chamber (Fig. 1.). By re-designing the existing and adding new elements, the change contributed to a considerable improvement of the device working culture, including, to reduction of the noise level. 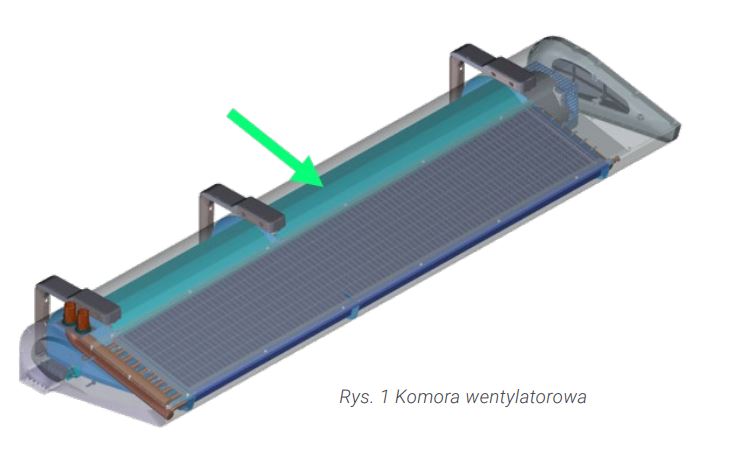 Apart from the fan chamber, other small elements of the curtain were modified such as particular sizes of openings in the internal metal sheet or shifting (for construction reasons) of openings of the curtain internal structure. The changes, apparently slight, had a considerable influence on the work of the curtain. While looking at the entire project from a broader perspective, these modifications also show how significant pursuit of perfection and improvement of details in the offered devices are for VTS. By means of the WING project, VTS proves how important development is to it. The foregoing changes were introduced on 24 May 2019 and will certainly contribute to increased sales on all markets.

Next article
Great comeback of heaters with a classic 3-speed engine!

With a great pleasure, we invite you to read the next issue of our corporate Global Player newsletter. This time we present a review of our 2019 activities. Happy New Year and have a good time reading.

The new EC motor version of VOLCANO heating unit is a little different in a few aspects. It's worth taking three minutes break to make familiar with the brand new units connection.

We've have started up a new campaign for our loyalty program – INSTAL PARTNER. The hero of the campaign is Richie (pl.Rysiek), who is an installer of HVAC units. The program is dedicated to our business partners in Poland, soon maybe in other regions.

Comparison of costs and effectiveness of both solutions

We invite you to watch the new movie, where we present the connection and start-up of VENTUS Compact air handling units.

With pleasure, we present photos of our suspended VENTUS Compact air handling units

With pleasure we would like invite you to visit our Production and Logistic Center.

Located in less than 50 kilometres south from the capital of China, Beijing Daxing Airport will become world’s biggest airport along with being the most progressive and modern transportation centre.

We are pleased to inform, that counterflow Heat Exchangers made of High Impact Polystyrene (HIPS) have been introduced to VTS offer.